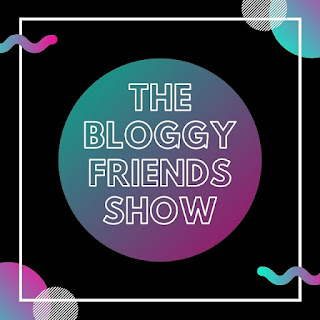 I've been talking about launching a show online in some capacity for years now. As a content creator, I felt a visual or audio show would be a lot of fun. Fear held me back for years, but I'm ready to give this a chance. April Fool's Day felt like the best day to launch, so here's my introduction and welcome to The Bloggy Friends Show!

What’s up, everyone? Famous Ashley Grant here and it’s my sincere pleasure to Welcome you FINALLY to the bloggy friends show. I've been talking about starting this show for years now. Though I can't quite say What it is exactly that has prevented me from starting it, a series of events in the past year has led me to realize there's no time like the present 2 just launch it already.

I know one thing that has held me back has been the fear of putting myself out there, especially considering that most of the work I've done in the past 6 years didn't even have my name on it. I've been a Ghostwriter since 2014, but long before that is when my writing career actually began. But I’m getting ahead of myself

In this first episode, I thought it would be a good idea to introduce myself, share how I got into blogging and explain the origin story of my silly moniker that I've been touting since 2009. I'll also share what my hope is for this show and what future episodes will look like. so let's Dive In!

In 2007 my very first written piece was published under my name in my university’s newspaper. I was working towards my journalism degree, and getting clips was required for one of my classes. A few short months later my first paid piece was published in a local Tampa paper called TBT which stood for Tampa Bay Times.  I have to say from that very first piece in February 2007 in the University of South Florida Oracle newspaper, I was hooked. For me, there was nothing quite like having your name displayed and a story you had written being visible for all of your peers to see. then when I got the gig with the TBT I was on cloud nine and convinced that I wanted to be a writer for the rest of my life.

Fast forward to 2009 and I had several writing gigs under my belt, I was writing stories for various news outlets both online and in print. About that time, I was covering a lot of local Tampa events and at 1, in particular, I met the guy who would give me my moniker Famous Ashley Grant.

His name is Ron McDougall, and at the time he was known in Tampa as Ron from the Don. He worked for the famous pink hotel in St. Petersburg, the Don Cesar as a concierge. Needless to say, conversations that ensued with him were always entertaining and I quite enjoyed chatting with him.  One night when I was covering a story as I walked into the room he blurted out “ oh my God! It's the famous Ashley Grant!”  I thought it was hilarious and I couldn't stop laughing. That night, he cemented it by calling me that multiple times and introducing me to several people as the Famous Ashley Grant. I can hear him now saying to people, “Do you know the Famous Ashley Grant?”

When I got home, after a little too much white wine I confess, I accidentally ordered business cards with that name on it. When they arrived, I busted out laughing but realized that I couldn't exactly return them. So I thought why not, I'll just hand them out and see what happens.

Incidentally, I started introducing myself as Famous Ashley Grant, and it was the first year that I made full-time income as a writer. As the momentum picked up during that year I got excited and so I bought the domain thefamousashleygrant.com and decided I was going to keep using that name because every time someone met me and I used it they would either laugh or they would roll their eyes. But the key was they would never forget. And that became essential for me to get more work.

Slowly but surely maintaining the level of work that I was getting became a little bit harder because anytime advertisers would pull out the first people to go would always be Freelancers which is what I always was. A freelancer. Come 2013 I was making significantly less income and begin looking for other opportunities. Then, in January 2014 ghostwriting literally landed in my lap. Suddenly, getting gigs was easy again, as long as my name wasn’t on the byline.

So I've been doing that while also trying to get more gigs under my own name ever since. Of course, I continue to try and get internet famous enough to make full-time income as Ashley Grant, but in the meantime, I’m truly loving how many clients I’ve helped to get their story and content out there for their businesses.

So there you have it. That's the backstory of how I got into blogging and how I got my moniker. Now you might be wondering, why call this the bloggy friends show? The truth is, the life of a writer can be a lonely one. A while back, I started calling my friends who were writers and bloggers my bloggy friends. I liked the idea That anyone who was a friend of mine had a special title of being my bloggy friend, and I often will say “let’s be friends” to people as I hand them my business card.

What will the show be about? I wanted this to be a show about bloggers, for bloggers, by a blogger. it won't be about how to start a blog though. In my opinion, there's plenty of posts, podcast and vlogging episodes, and articles about blogging.

So what I want this to be is a place about the wild world of blogging after you launch, or even after you've been around a while. I want it to be a place to hang out and learn about bloggers that are actually doing this and read their stories. I want it to be a space to learn about the latest news that could impact your blog, revenue, and business. But most importantly, I wanted to be a party to celebrate the coolest people in the blogosphere, and celebrate all the amazing things they are doing online. The goal of this show is to inspire, educate, and connect.

I plan to release 10 episodes or so per season as podcast, and in the first 10 episodes it'll just be me jamming I'm blogging. I want to talk about ghost blogging, promoting your blog, making money, and things like that.

Then later, I'd love to do a series of interviews with bloggers, vloggers, podcasters, and even brands all with the theme of connection and becoming bloggy friends! So that's what you can expect from me and the show. I do ultimately hope to share episodes and other clips that didn’t quite make sense to make a full podcast episode out of on YouTube as well. Without further ado, let’s jam on all things blogging!

I’m working on a proper website and social media handles for this show, but for now, you can find me as FamousAshleyGrant.com and as Famous Ashley Grant across social media. Let’s be friends! I’d love to connect with you. Until the next episode, may your page views be high, and your bounce-rate be low!